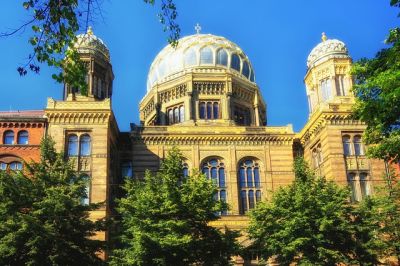 Posted at 14:41h in Allgemein by icaadmin 0 Comments
2 Likes
Share
Departure from Hotel Estrel: 1:00 pm – return to Hotel Estrel: 5:00/5:30 pm
Language: English
Berlin used to be a center of Jewish life for many centuries

and had one of Europe´s largest communities in the early 20th century. This bus tour will focus on the places and traces of Jewish life in Berlin in the past and present. In the old Jewish Quarter of Berlin we will search for traces of the past and witness the new flourishing Jewish life in Germany´s capital. See the site of the city´s first synagogue, the golden dome of the New Synagogue, the Jewish museum (a spectacular design by Daniel Libeskind) and sites of successful resistance against the Nazi terror.
In the “Scheunenviertel” (Barn Quarter), a center of Jewish life until the 1930s, Berlin´s first synagogue was built in 1714. It was destroyed during World War II – a commemorative plaque and stones marking the synagogue´s outline indicate where the building was located. Only a few meters down the road your guide will tell you the story of the peaceful resistance of the Rosenstraße protests – here, in 1943 the non-Jewish wives of arrested Jews staged successful resistance against their husbands´ deportation. And they were not the only ones who took risks to save Jewish lives during that period. We will also see Otto Weidt´s workshop where Jewish workers hid in a backroom during raids. Otto Weidt, like the famous Oskar Schindler, has been officially recognized in Yad Vashem as one of the Righteous among the Nations.
As we continue our tour, you will learn about the cultural life of Berlin´s Jews in the past and in the present, see sites of former Jewish hospitals and schools and the city´s oldest Jewish cemetery that was destroyed under the Nazi 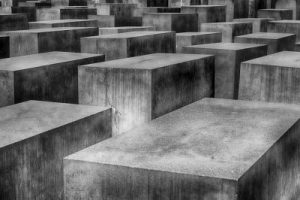 regime –it is definitely worth a visit as the grave of the famous 18th century philosopher Moses Mendelssohn can be found there. See the Jewish Gymnasium, or Grammar School, one of the city´s most prestigious schools today, kosher cafes and the beautifully renovated golden dome of the New Synagogue, and you will feel that Berlin´s Jewish community with its  10,000 or so members is thriving again. The tour includes walks around the Holocaust Memorial with its field of concrete slabs or “stelae” and through the Jewish Quarter around Hackescher Markt.
About the excursions: All ICA 2018 delegates are invited to join the excursions on Tuesday and Thursday afternoon after the congress program. In total, six different tours covering themes for both new and frequent visitors are available. Each tour will last about four hours and is free of charge for delegates. The number of participants is limited. It is advisable to book your preferred tour well in advance.